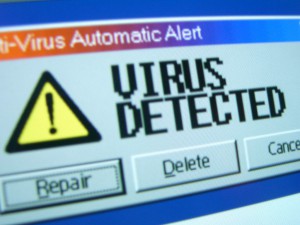 Today, there are 10 viruses which the experts consider to be disastrous for any computer system due to the fact that they can disable the system. The different types of viruses include, host requiring viruses, worms (they replicate automatically), and Trojan horses (they affect multiple areas).

Melissa:
Melissa is the first computer virus that the experts noticed for the first time. It uses word document and it spreads through e-mail messages. When the receiver opens the file, it gets activated and the top 50 people on the address book of the recipient get the same mail. It caused an increased number of e-mails; so many companies had to drop their mailing programs.

I Love You:
It also comes through email with an attachment. The message says that the mail is from a secret admirer. Opening the attachment will activate the worm and replication of the virus occurs. The target is receiver’s hard drive. Many new files are added to the receiver’s registry keys, like the WIN-BUGSFIX.EXE file steals the password of the receiver. Research shows that this virus caused a damage of around $ 10 billion.

Klez:
This virus also works like Melissa but with some variations, and it makes the computer almost inoperable. It disables the antivirus software, and it also tends to do spoofing where the email that seems from a satisfied source is actually a spam containing a virus inside.
Code Red and Code Red II:
These are worms which affect the Windows 2000 and Windows NT operating systems. These create backdoors in the system; also create access for the hacker to control the machine. The hacker then can use that system to extract information and steals personal information.

Nimda:
This virus targets the internet service providers, and then creates a backdoor in the system, allowing the hacker a limited or unlimited access to the computer functions. The virus also attacks the mobile phones.

SQL Slammer/Sapphire:
This virus attacks the internet server and increases after every few seconds. Initially ATMs, 911 services in Seattle and Continental Airlines were greatly affected by this virus and $1 billion damage was recorded.

MyDoom:
This is a backdoor creator worm, having many variants which affect different sites on the system. This virus attacks the search engines, e-mail receivers and when it stops spreading, the backdoors remain active.

Sasser and Netsky:
These are two different programs working on similar code. Sasser worm attacks through MS Windows vulnerability and the computer automatically shuts down. Netsky spreads via e-mails and windows network.

Leap-A/Oompa-A:
This virus specifically attacks Mac computers through iChat messaging and circulates. The iChat contacts of the victim get the message as a result of propagation. The message also has a corrupted JPEG image file.

Storm Worm:
This is a Trojan horse program, and one version of the worm turns the computer into a zombie or bots and the other downloads unknown applications through fake links. The subject of the e-mail changes according to the current situations. Spam mails become common, but the good thing is that the virus is not difficult to detect.

The best way to protect yourself is to not open up any links from unknown email senders and invest in a quality virus detection software package.