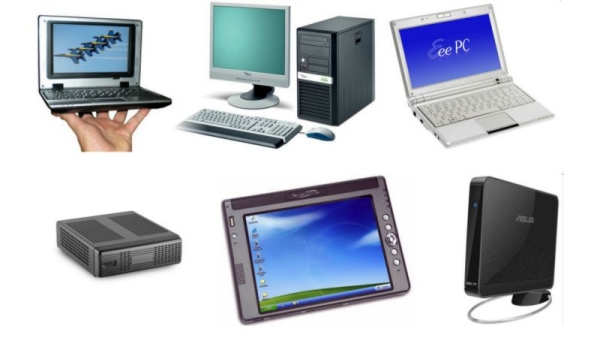 Most people are familiar with the two main types of computers: desktops and laptops. But did you know that there are many more models out there that offer amazing benefits? In the following sections, we are going to spend some time talking about the various types of computers in existence, as well as discuss their pros and cons.

Desktops
Due to their relatively large size, they aren’t designed for portability and are instead or well suited for remaining in a single location. The advantage to desktops is that there are more parts available for them should something happen to your model. One of the downsides associated with this model is that they do consume a lot of power, a lot more than your standard laptop.

Laptops
These are designed for their portability and light-weight design. Their designed for the mobile user who needs to answer and respond to e-mails wherever they go. With built in key boards, a mouse, and screen, there is no need for any other kind of external device to use these computers. Their main downside is that they do require battery charges on a relatively frequent basis and they are much more fragile than desktops.

Net-Books
Net-books are considered laptops except they are much smaller in size. Their average screen size is typically less than 11-inches and their RAM isn’t large than 1GB. Although they are a bit slower than your average computer, they are extremely portable and can fit almost anywhere. This makes them perfect for the mobile student or businessman.

PDAs
Also known as personal digital assistants, PDAs are handheld computers that work on touch screen technology. They use memory cards as their primary source for storing data and they can be used to play audio files, browse the Internet, and even read and answer emails. Accessing the web with personal digital assistants is as simple as using Wi-Fi connection or Bluetooth technology.

Other Models That Aren’t So Common
Minicomputers received their name due to their decreased memory and processing capacity. However, they are the size of two refrigerators and require a lot of energy to be used. While they aren’t so common today, they were widely used in the 1960s.

Devices known as “Servers” are also computer devices that aren’t as common as the ones discussed above. These are typically very large in size and will use a multitude of hard drives and processors to operate and exchange information.

Finally, “Supercomputers” are computers that are extremely expensive but that can take on extremely complicated problems including mechanics, quantum physics, and even molecular theory. While you wouldn’t necessarily be using these types of computers to log onto Twitter, they are able to produce massive amounts of processing and computing power.

Conclusion
Among all of the uncommon models we discussed in this article, this one is the most uncommon for average consumers. Nonetheless, each one of these is unique in their own nature and offers their own set of advantages and disadvantages.I would love to hear your thoughts in the comments below.