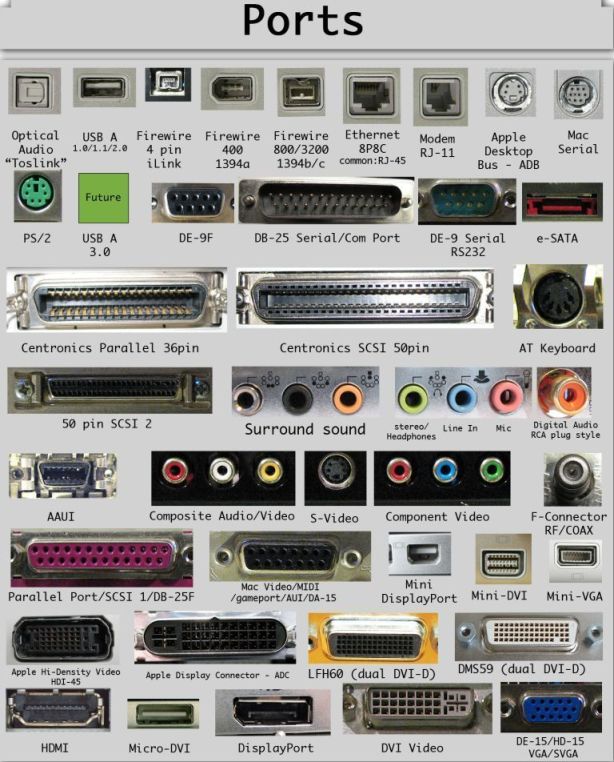 Every computer today has at least several different ports. Why? The reason is simple – computer ports have a vital purpose. You can use it to connect an external device, whether it’s an input or output device. Most popular input devices are keyboards, mice, scanners cameras networks and video devices. These devices provides data or signals a computer in a certain way. Output devices convert computer-generated information into a form that is readable by humans. Therefore, output devices are monitors, speakers, headphones, projectors and printers. Each of these devices is connected with a computer using one of the ports, unless they are connected wirelessly which is the way of the future.

Let us walk you through the most popular ports and their uses:

USB port
USB (Universal Serial Bus) is a standard port used to connect computer peripherals including keyboards, mice, iPods, external drives, smartphones and much more. Notebooks and desktop computers usually come with at least two USB ports, but you can easily expand this number by using a USB hub. Current version of the USB port is 3.0, so keep that in mind when buying a computer. Although most devices work on the old 2.0 version, having at least one USB 3.0 port would be great if you are using an external drive, for example, as it would give you up to 10 times faster speed than the old port.

Ethernet port
Ethernet port is used to connect a computer to a high speed Internet via an external cable or DSL modem. It is available on desktop computers mostly, but on a lot of notebooks as well, although in the recent years more and more notebook users choose to connect to the Internet wirelessly. Data travel speeds can be anywhere from 10 megabits per second up to 1000 megabits per seconds if we are talking about the Gigabit Ethernet.

Firewire port
This port was invented by Apple and has been a part of their Mac line since the early 2000s. Firewire port is used to transfer a big amount of data at great speeds. Depending on the port version, data can travel at either 400 or 800 megabits per second. This was pretty impressive back in the days of USB 1.1 and USB 2.0, but with the recent expansion of USB 3.0, Firewire is not that impressive as it used to be.

VGA port
VGA (Video Graphics Array) port has 15 holes and it’s used to connect a computer monitor to a video card. Designed in 1987, it is still used today; however, the number of video cards and monitors that support it has been dropping a lot over the course of the last several years.

DVI
DVI (Digital Visual Interface) port is very popular way of connecting your video card to a monitor. Created in 1999, it superseded the VGA port. Although newest LCD monitors will still work with a VGA input; DVI, HDMI, and Display Port are considered a much better option nowadays.

HDMI port
HDMI (High-Definition Media Interface) port is widely used today, and for a reason. It supports both video and audio data transfers. With HDMI you can easily connect your computer to a monitor, but also to a TV, as most TVs these days have an HDMI port.

Display Port is the newest port that was designed as the successor to DVI; however, it still isn’t as popular as HDMI or DVI. But, this may change in the near future as it’s being included in most new higher-end notebooks and all new Macs. More and more monitors support it as well.